Successful caterers understand that customers are really turned off by problem odors.  When people are celebrating special occasions, everything must be perfect.  Ensuring that your party hall is clean and odor free is a must for success in the hospitality business, and SanusAer® ozone generators are the proven solution to destroy reception hall odors. 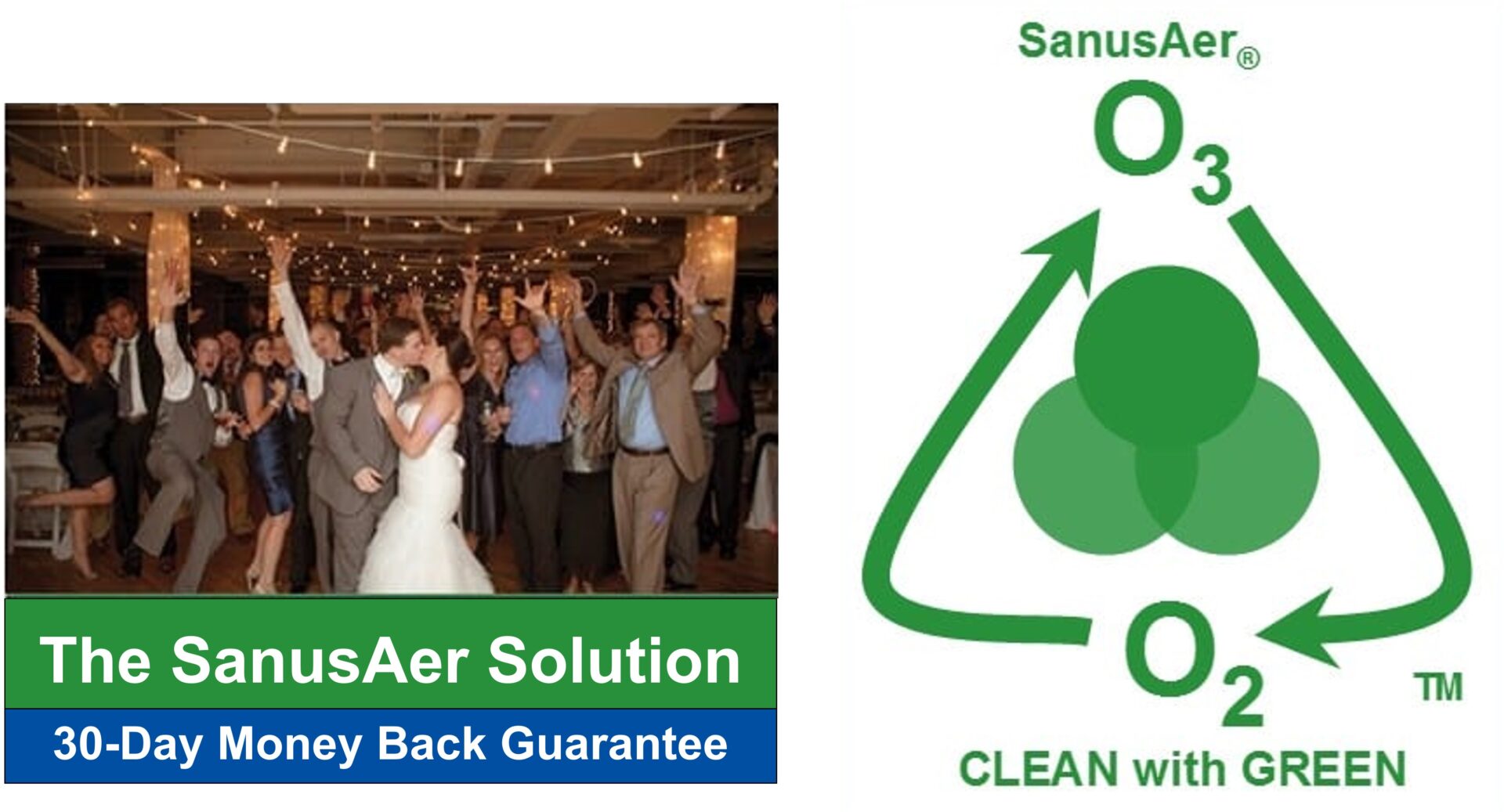 Reception halls build up odors from the food and beverages they prepare, as well as other factors such as body odors, humidity in the kitchen, and smoke.  SanusAer Ozone Generators are a powerful odor eliminator that will destroy these odors at their source, while killing microorganisms such as mold and mildew.  The result is a fresh smelling facility and a much better experience for your staff and customers.

Problem: Odor causing microorganisms and cooking vapors get trapped on walls and ceilings, as well as carpets, flooring, furniture and fabrics.  They can even reside in the ductwork and a multitude of hidden crevices throughout the facility.  Of course, any residue from food and beverages will lead to the growth of microorganisms which, in turn, will contribute to the accumulation of odors in the establishment. 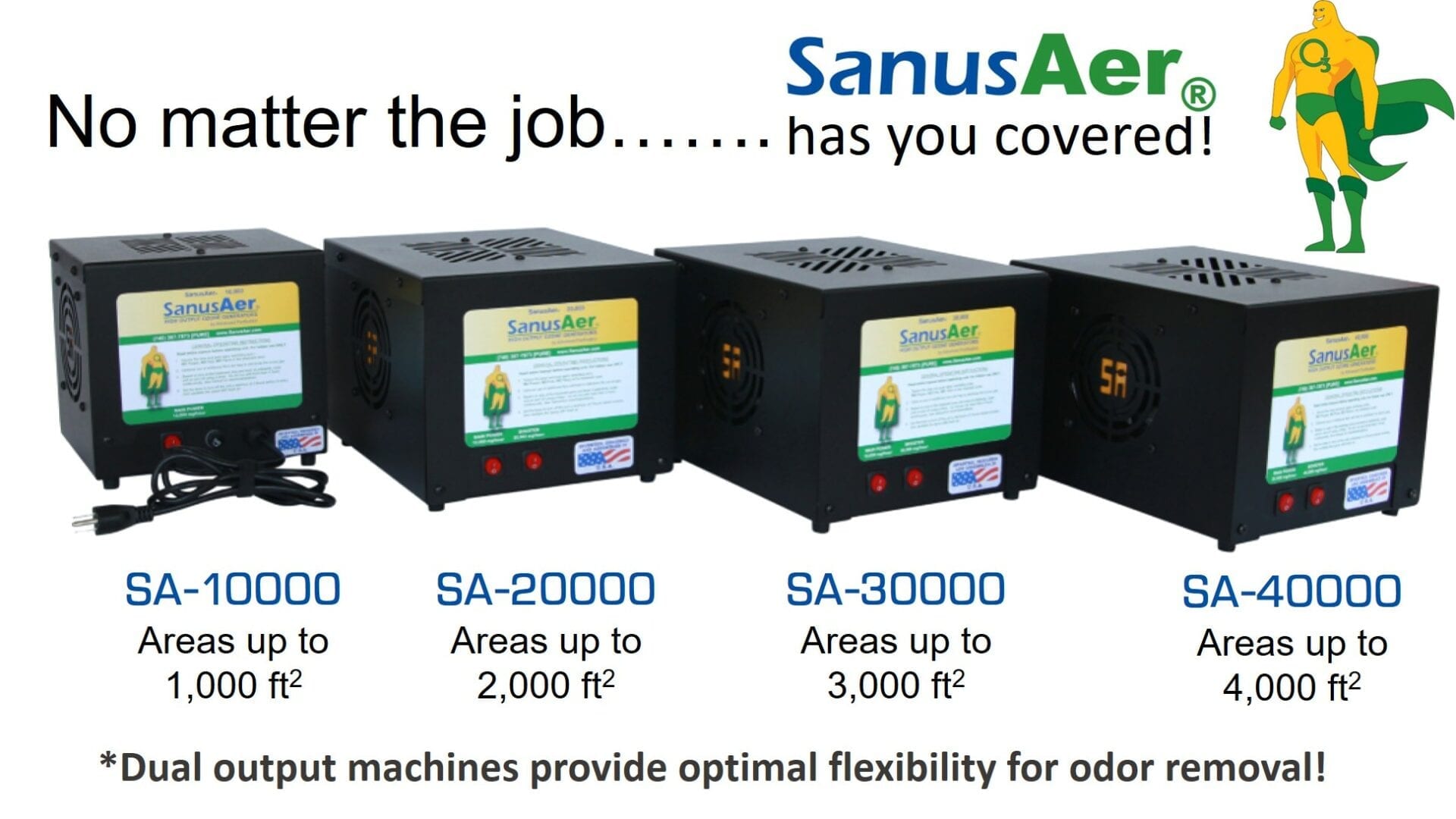 Solution: The best way to remove odors is to run the SanusAer® Ozone Generator after the facility closes, when it is vacant.  Have the last person who leaves at night turn the unit on and allow the generator to run for several hours, oxidizing the odors and reducing the microorganism count. The unit should be set to turn off a couple of hours before your prep staff arrive the next morning.

Note: The fan on the thermostat for the HVAC system can be turned to the ON position during the treatments to more effectively circulate the ozone, and to eliminate any odor sources that have built up inside the ductwork.

We use cookies on our website to give you the most relevant experience by remembering your preferences and repeat visits. By clicking “Accept All”, you consent to the use of ALL the cookies. However, you may visit "Cookie Settings" to provide a controlled consent.
Cookie SettingsAccept All
Manage consent

This website uses cookies to improve your experience while you navigate through the website. Out of these, the cookies that are categorized as necessary are stored on your browser as they are essential for the working of basic functionalities of the website. We also use third-party cookies that help us analyze and understand how you use this website. These cookies will be stored in your browser only with your consent. You also have the option to opt-out of these cookies. But opting out of some of these cookies may affect your browsing experience.
Necessary Always Enabled
Necessary cookies are absolutely essential for the website to function properly. These cookies ensure basic functionalities and security features of the website, anonymously.
Functional
Functional cookies help to perform certain functionalities like sharing the content of the website on social media platforms, collect feedbacks, and other third-party features.
Performance
Performance cookies are used to understand and analyze the key performance indexes of the website which helps in delivering a better user experience for the visitors.
Analytics
Analytical cookies are used to understand how visitors interact with the website. These cookies help provide information on metrics the number of visitors, bounce rate, traffic source, etc.
Advertisement
Advertisement cookies are used to provide visitors with relevant ads and marketing campaigns. These cookies track visitors across websites and collect information to provide customized ads.
Others
Other uncategorized cookies are those that are being analyzed and have not been classified into a category as yet.
SAVE & ACCEPT
×