Chemical and biological odors are often prevalent in warehouses and shipping containers and can  cross-contaminate nearby goods, resulting in a financial loss. Removing these odors requires a broad based, green technology capable of treating large spaces.  Smart operators use SanusAer® high output ozone generators that will completely remove odors in warehouses and shipping containers by destroying the biological and chemical pollutants at their source. 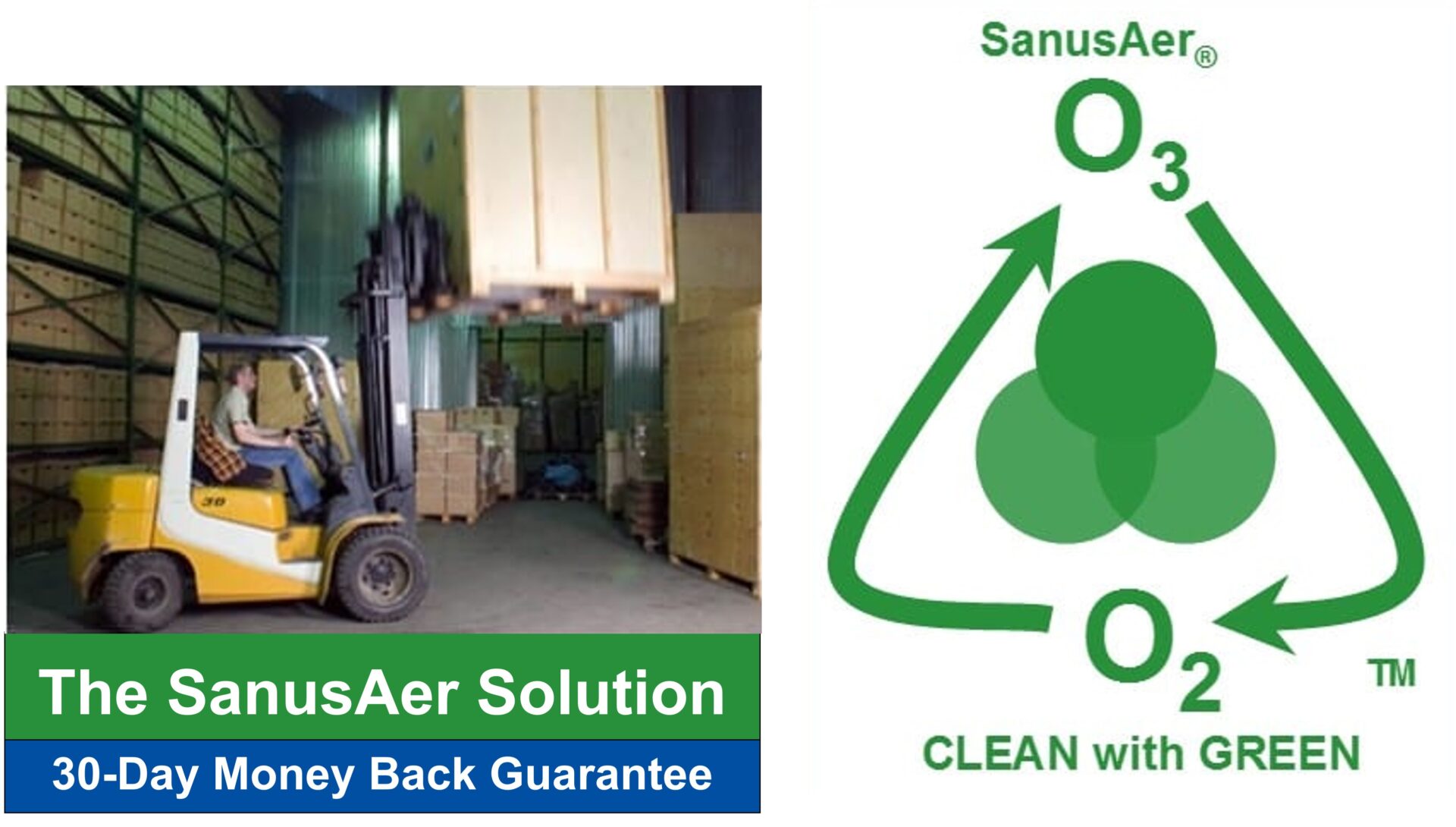 Shipping / storage odors exist because everything imaginable is being distributed throughout the world: electronics, food and spices, chemicals and fertilizers, plastics and polymers, textiles, and even waste.  All these shipments come with their unique odor challenges and it can be very difficult to "reclaim" warehouses / containers once the smells have permeated the space.  SanusAer® ozone generators will eliminate these odors at their source by destroying the VOCs or Biological pollutants responsible.  The exclusive SanusAer® design provides the most effective delivery of Ozone to a given treatment area, resulting in a faster, more complete odor removal and sanitization.

Problem: Shipping odors are a difficult problem, especially containers, because the smells are from diverse sources.  A shipping container transporting textiles this week, can be called into service for food next week, and odor accumulation from both can occur.  Additionally, the presence of microorganisms will also contribute to odor problems.  Cleaning the space, whether a warehouse or a container requires that all of the surfaces be treated to completely address the odors, because simple "masking"  with fragrances can lead to further odor accumulation or contamination of future shipments..

Solution:  Ozone is a broad based sanitization strategy and one of nature's most effective oxidants, treating everything that comes into contact with it. by breaking down VOCs and biological pollutants, thus eliminating odors at their source.  SanusAer high output ozone generators deliver substantial amounts of pure ozone, the most effective odor eliminator; and when applied in "shock treatment" fashion, can quickly address an odor.  Because it is a gas, all the surfaces exposed, literally anywhere air currents travel, will be treated.  Additionally, ozone breaks down into clean, breathable oxygen after the treatment, leaving no dangerous chemical residue behind.  The container or warehouse must be unoccupied during treatment, and the area must be aired-out prior to re-entry, however, the odor will be completely eliminated in a short period of time.

Note:  Treating a container or warehouse with Ozone ensures that future shipments won't be impacted by the odors from a previous load.  A quick, green solution to a costly problem, SanusAer ozone generators are the odor removal technology of the future, available today, that will get you back in business with minimal interruption.

We use cookies on our website to give you the most relevant experience by remembering your preferences and repeat visits. By clicking “Accept All”, you consent to the use of ALL the cookies. However, you may visit "Cookie Settings" to provide a controlled consent.
Cookie SettingsAccept All
Manage consent

This website uses cookies to improve your experience while you navigate through the website. Out of these, the cookies that are categorized as necessary are stored on your browser as they are essential for the working of basic functionalities of the website. We also use third-party cookies that help us analyze and understand how you use this website. These cookies will be stored in your browser only with your consent. You also have the option to opt-out of these cookies. But opting out of some of these cookies may affect your browsing experience.
Necessary Always Enabled
Necessary cookies are absolutely essential for the website to function properly. These cookies ensure basic functionalities and security features of the website, anonymously.
Functional
Functional cookies help to perform certain functionalities like sharing the content of the website on social media platforms, collect feedbacks, and other third-party features.
Performance
Performance cookies are used to understand and analyze the key performance indexes of the website which helps in delivering a better user experience for the visitors.
Analytics
Analytical cookies are used to understand how visitors interact with the website. These cookies help provide information on metrics the number of visitors, bounce rate, traffic source, etc.
Advertisement
Advertisement cookies are used to provide visitors with relevant ads and marketing campaigns. These cookies track visitors across websites and collect information to provide customized ads.
Others
Other uncategorized cookies are those that are being analyzed and have not been classified into a category as yet.
SAVE & ACCEPT
×